The 1956 Fender Stratocaster marked one major change. Up until now, they were made with Ash bodies. But, in the summer of ’56, the switch was made from Ash to using Alder for the bodies. Alder is easier on the tools, doesn’t need a grain filler, and is still a beautiful yet light wood. One other noticeable change was on the headstock. The string tree was changed from the round string they had been using since the inception of the Strat, to a butterfly string tree.

One other noticeable change was on the headstock. The string tree was changed from the round string they had been using since the inception of the Strat, to a butterfly string tree. 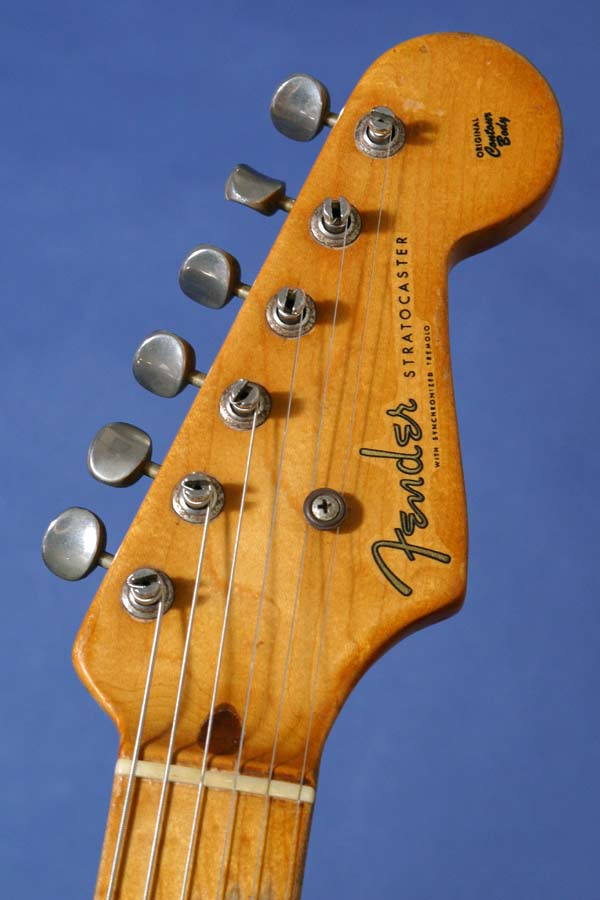 Fender still continued using the 2-tone tobacco burst finish as standard. But, now instead of spraying the amber onto the body they were dying it first. Then, they would spray the outer edge to create the burst. This was followed by a thin nitrocellulose based clear lacquer. Over time this thin clear coat would yellow due to exposure to UV or sunlight. It was also very prone to cracking and checking. Another problem was that the spray was very thin. But, over time as it cured the lacquer would become even thinner and was very easy to wear through to the wood with just a little use.

As of 1956, Fender was still using polystyrene based plastics for their guitars. This material, commonly nicknamed bakelite (pronounced Bake-A-Lite) was very brittle. It would wear down and crumble apart quite easily. So, it’s not uncommon to see guitars from ’56 today with the top of the pickup covers mostly worn off exposing the black pickup underneath. The knobs would also break and crack along with the pickguard and the pickup selector switch tip.

Fender now switched the tuning keys from the previous Kluson “no-line” tuners over to the Kluson Deluxe “single-line” tuners. This was marked by a single line reading Kluson Deluxe that ran vertically down the center of the tuning key back cover. Underneath the tuning keys read “2356766 PAT. APPLD.” This change took place mid-year in 1956. The first part of the year still included the Kluson “no-line” tuners that were stamped “2356766 PAT. APPLD.” underneath. The no-line tuners included a blank vertical line on the tuner gear casing as seen below.