1964 Fender Stratocaster Exposed – Are They Worth The Money?

The 1964 Fender Stratocaster is also one of my favorite years for the Stratocaster. It was the mid 60s and the surfing craze had hit. To cash in on it Leo Fender had really started ramping up the custom colored Stratocasters.

The Stratocaster itself hasn’t changed much over the years. From mid-1963 to 1964 there were just minor changes as they “transitioned” the model. However, there were quite a few minor changes including the first major change to the Fender headstock logo. First of all, Fender changed from the “spaghetti logo” to what is now known as the “transition logo” shown below. 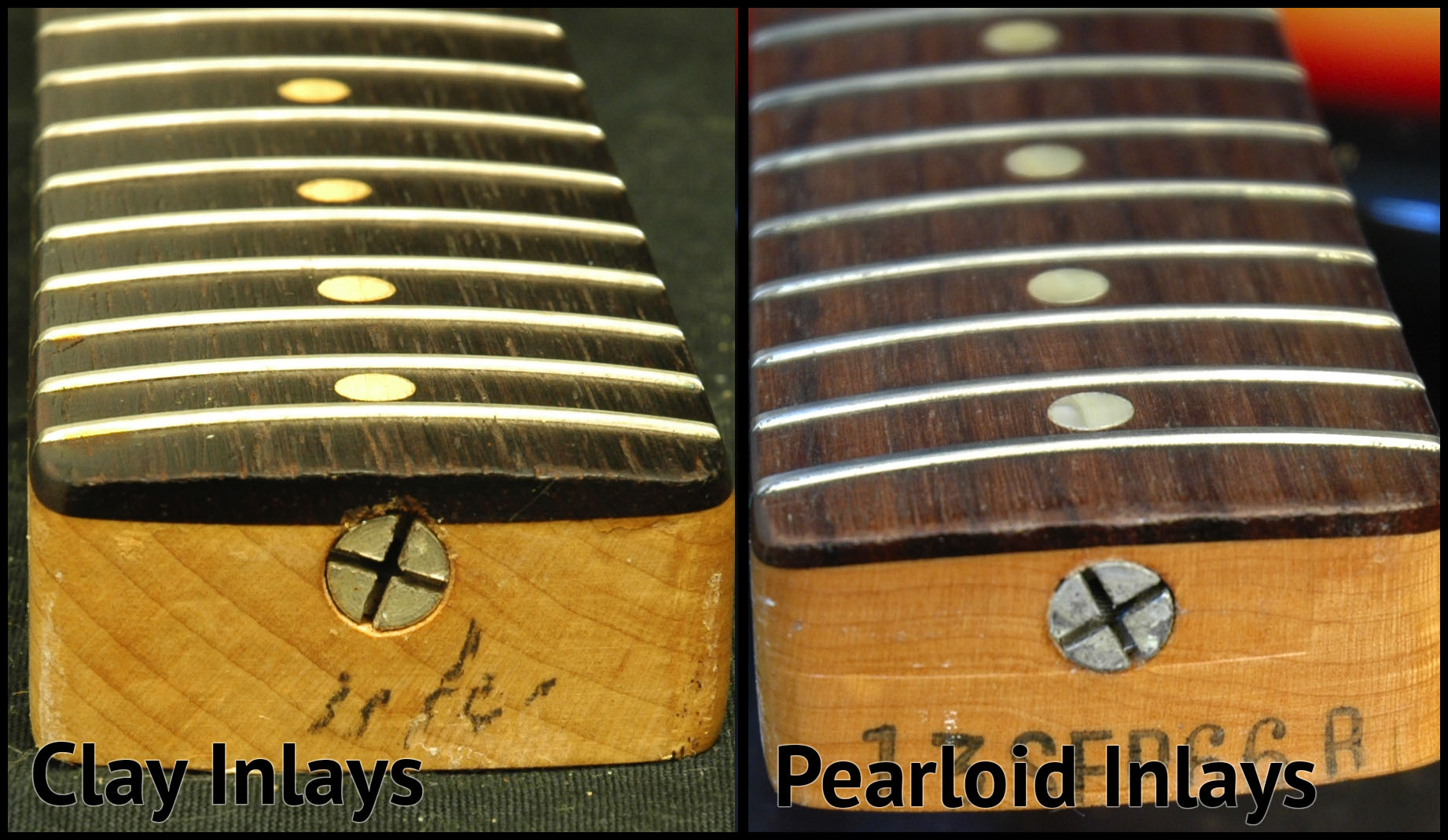 The pearloid dots didn’t start until very late in 1964 and carried over into 1965. There are some instances where you’ll see a 1965 with clay dots and a late 1964 with pearloid dots. The reason for this is that Leo Fender was very miserly. He didn’t waste anything. So, when they were changing parts or tooling mechanisms there would be “transition pieces” like that. You can find those all throughout the Pre CBS era of Fender.

The fall of 1964 also saw the change from the celluloid “mint-green” pickguard to the white ABS plastic pickguard.

The 1964 Fender Stratocaster also stuck with the curved laminate fingerboard made of Brazilian rosewood as you can see in the image below. The main part of the neck was still rock maple and used the same truss rod as well. You can also see the neck date stamp. The 2 on the neck date is often confused for the date it was made. But, it’s actually the number for the model of guitar Stratocaster.

For instance, necks with a 4 in that spot are Jazzmasters. Precision Basses are marked with a 7. As far as build date for the neck you get the model month year. 2 Feb 64. The B at the end of the date is the neck width. You will occasionally see a width of A which is a slightly skinnier neck for smaller hands. The standard width was 1 5/8″. 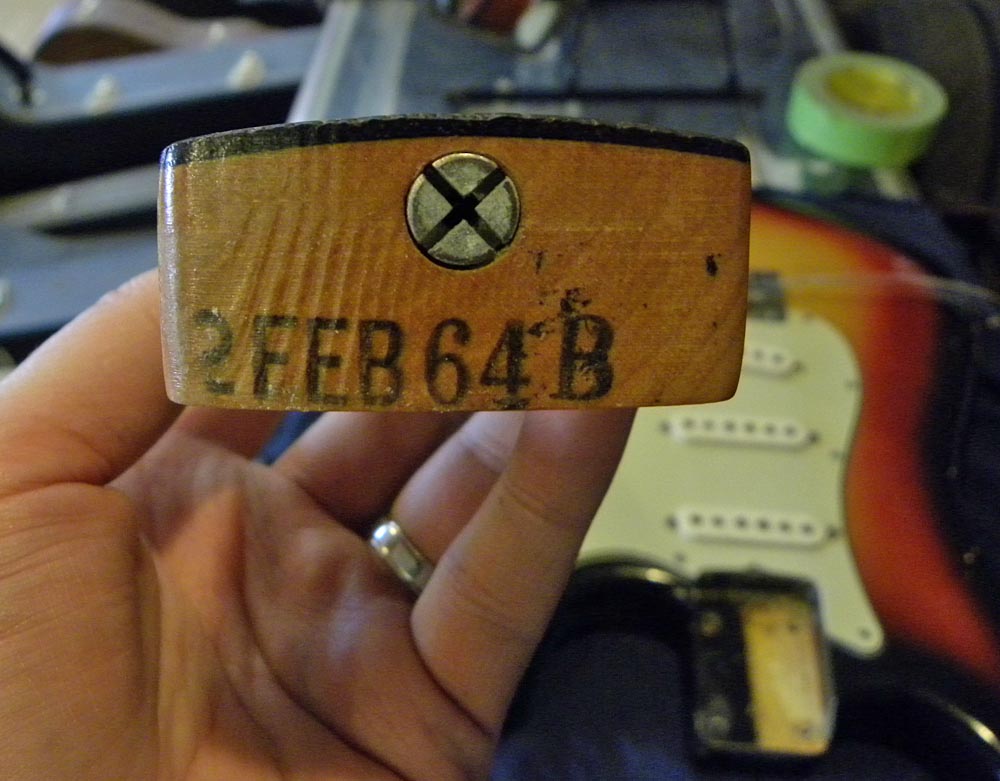 Fender continued to use the paint stick (which was a piece of conduit flattened on one end) screwed into the upper bout side of the neck pocket as shown below. 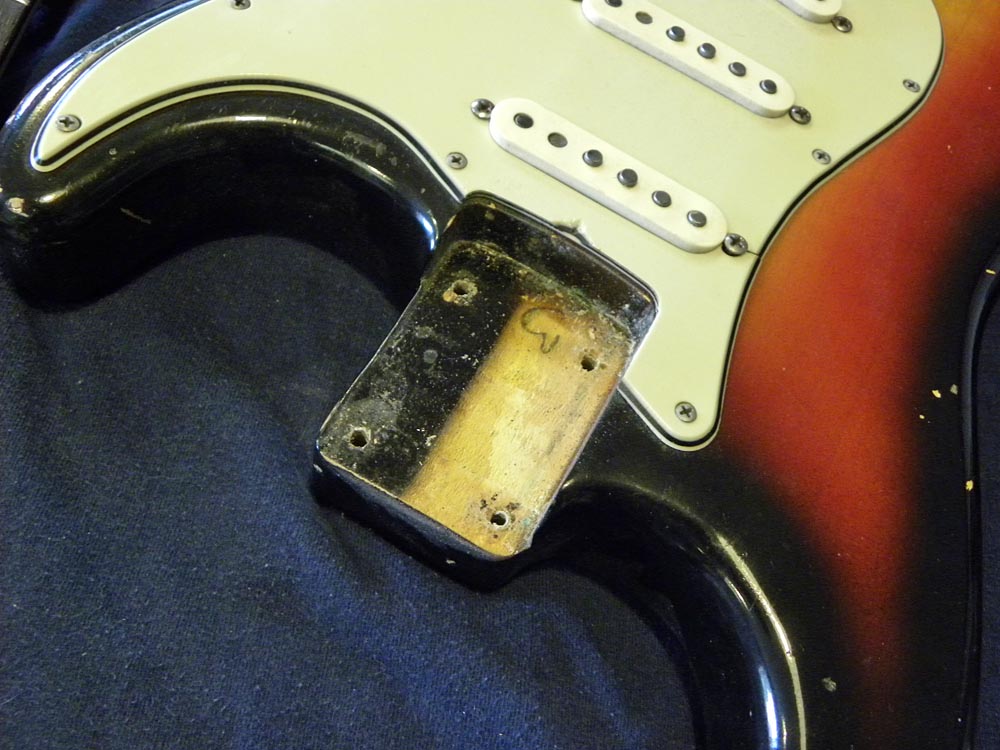 1964 also brought on the use of more pieces of wood to make the body and less appealing looking wood because it was cheaper that way. They were trying to make the guitars faster by speeding up production. So, on the sunburst models, the yellow was now being sprayed after the initial yellow dye. It made the yellow look more milky colored to cover up the wood more. Also, the color separation didn’t blend as well as previous models. The 1963 Stratocaster is on the left and the 1964 is on the right in the image below.

One thing you would also see from 1962-1964 was the very occasional use of Mahogany as a wood for the body. Over the years, I’ve seen a handful of authentic mahogany body Stratocasters from that time frame. Here is an example that Eddie Vegas has on his site for sale right now. I’ve always been intrigued with the mahogany strat bodies. They give off a little bit of a different sound than the normal alder does. Very sweet sounding. 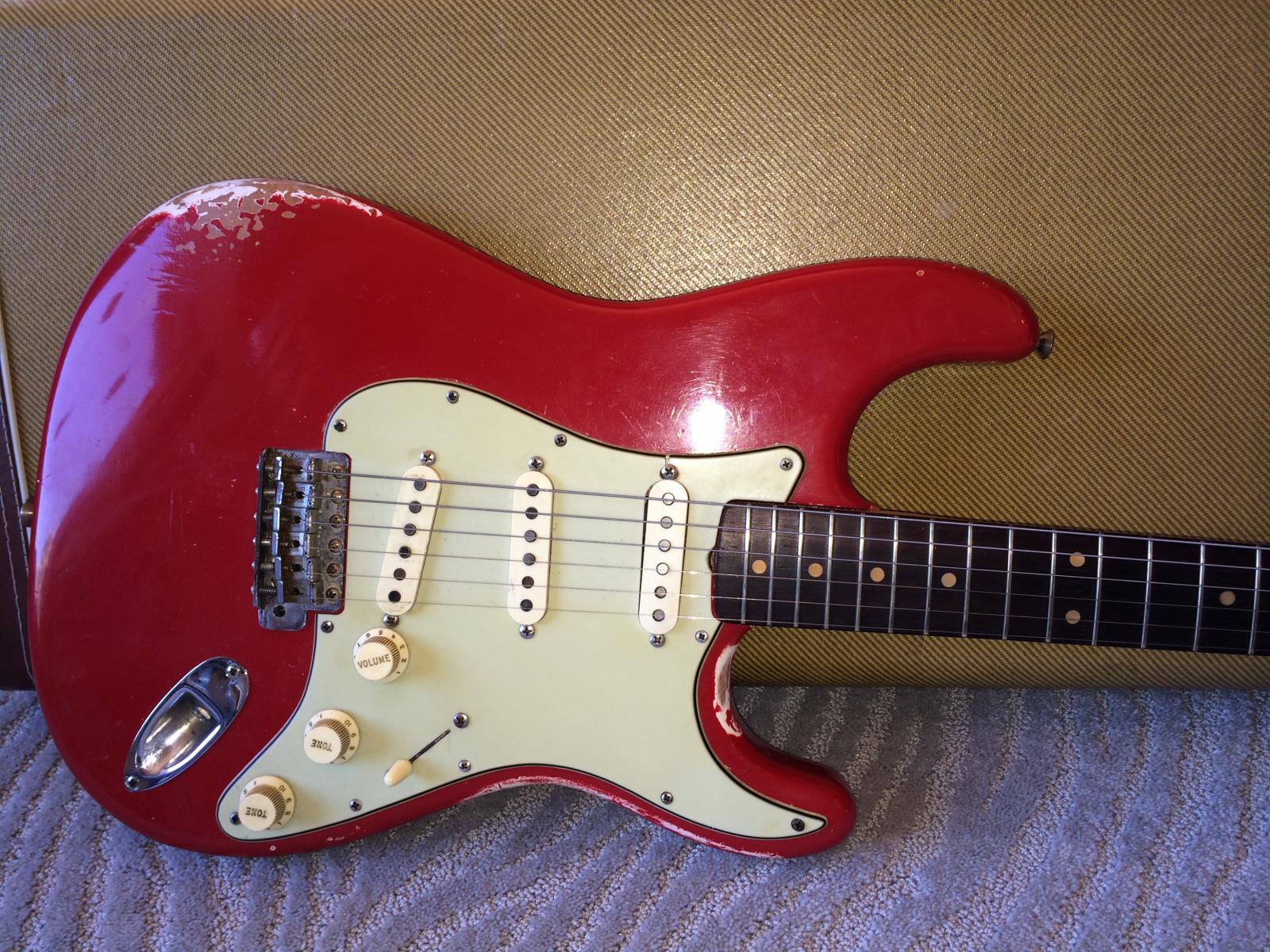 Since its inception the Stratocaster had been using the black bottom single coil pickups. The only change to them had been around late 1959-early 1960 when they changed from winding them north wound to south wound.

They started the year off with the standard south wound black bottoms then around the spring to early summer started stamping the bottom of the pickups with a yellow date on the bottom showing when it was wound as seen below. 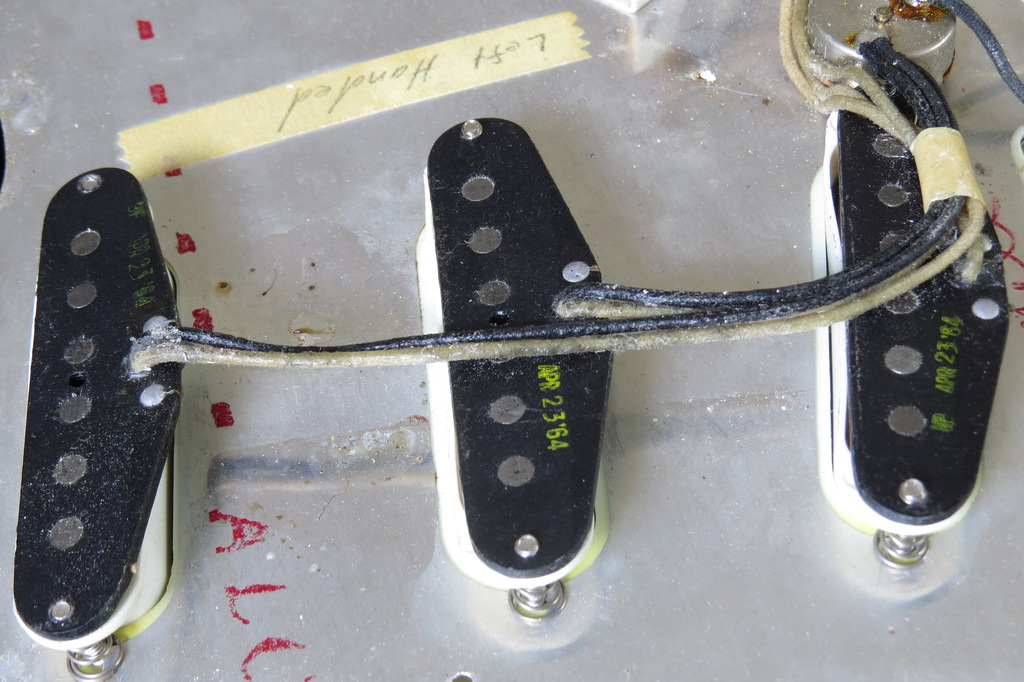 As they moved through the year of 1964 they transitioned to a gray bottom pickup. At this point that was only change to the pickup was the color of the bottom. 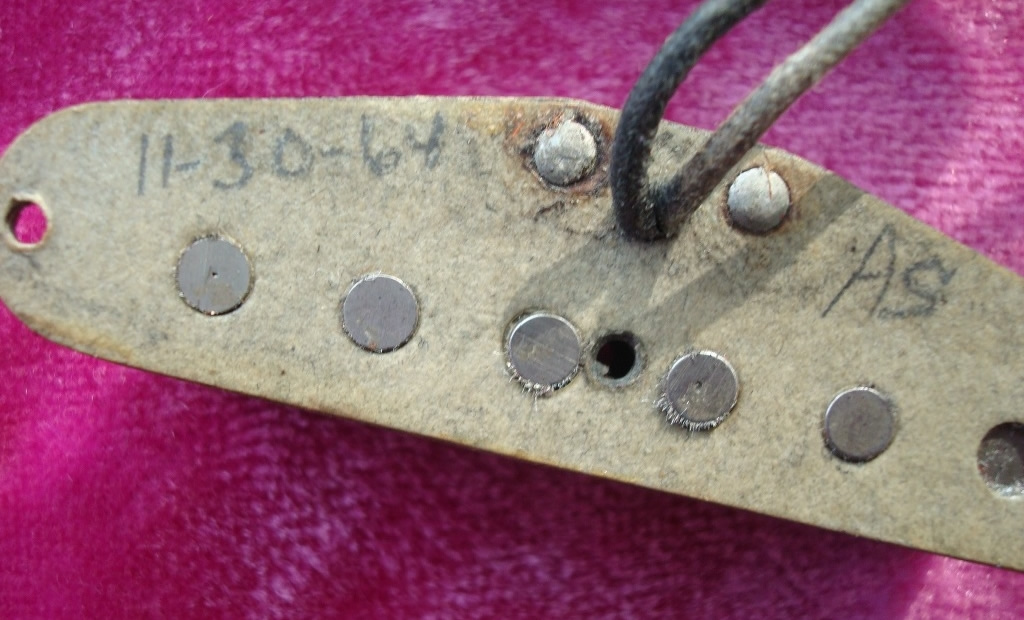 There were two color options of Pre-CBS guitar cases through the year of 1964. One, was the cream colored or blonde case used from mid 1963-mid 1964 as seen below. (This one is my favorite). 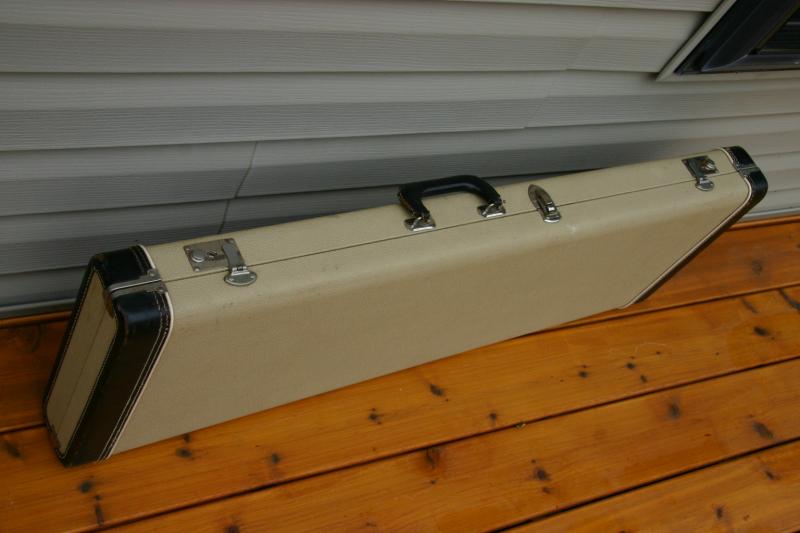 Here is an image of the burnt orange crushed velvet interior. 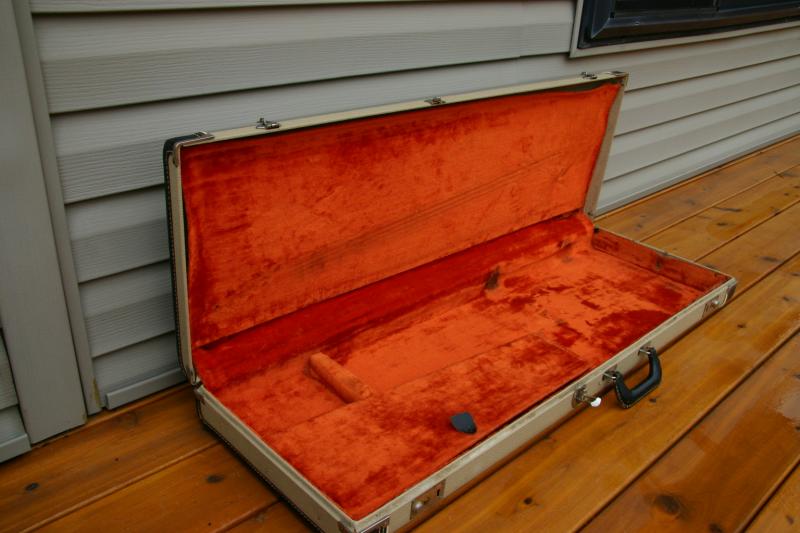 The other case used toward the end of the year in 1964 was the black no logo case. It was exactly like the blonde case but with black tolex instead. And it’s called the no logo case because well…it had no Fender logo on it until mid-late 1965 or so.

The insides of the black cases were the same burnt orange crushed velvet interior and the black leather duck foot handle on the case pocket. The case pocket as seen in the above image is angled with the larger side being on the headstock end of the case. These cases were smaller than cases we see today.