The 1957 Fender Stratocaster became a music icon. These maple necked beauties are defined by their 2 tone sunburst and their V-Shaped neck profile. Throughout 1957 you’ll see necks go from sort of a boatneck carryover from 1956 into a hard V shape. Then, as the year comes to a close they begin to take on more of a softer V again. They are normally some fairly thick neck backs but they fit nicely into the palm of your hand. These are some of my favorite of all Fender Strat necks.

Some common features for ’57 were the extremely contoured body that came with a standard 2-tone tobacco burst finish. The bodies were made of alder and the necks were made of 1 piece maple. This wood had been air dried for decades. It’s rumored that the wood was predominantly cut in the 20’s and 30’s. The neck shape varied slightly from guitar to guitar as a result of the handcrafting that was used to shape each neck.

The tuning machines were Kluson Deluxe brand. They had to be cut down to actually fit the Fender Stratocaster headstock. There was a machine that Fender had put together to cut the ends of the tuning key mounting bracket off. You can see in the image below what the tuning keys looked like before being nipped. 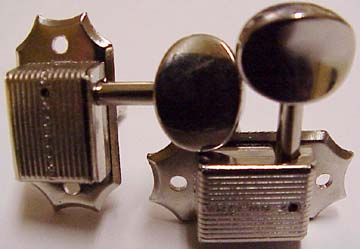 After they are nipped on the ends they look like the tuners you see below. Fender nipped off all tops and bottoms except one top and one bottom for each set. That allows the tuning keys to fit tightly onto the headstock and it saved on screws. Leo Fender was very miserly and would cut corners and save money anywhere he could. 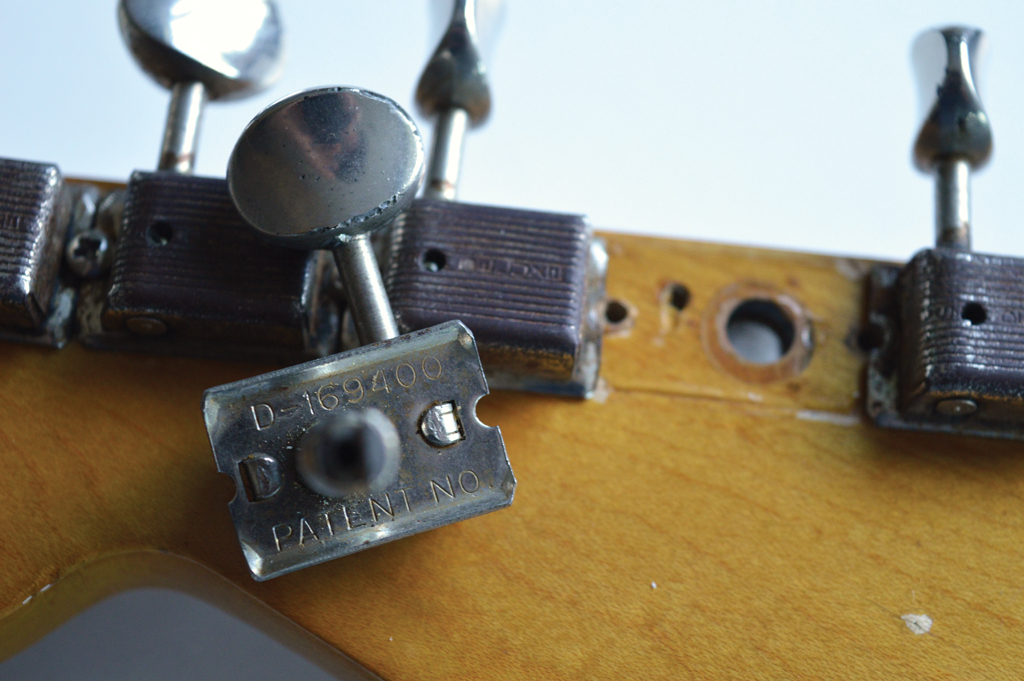 One other thing you will notice from the image above is that with that D string tuner removed you see one extra hole that seems out of place. That’s actually a template hole. That’s one marking to help verify an original neck. Fender used templates and jigs to make all of the parts for their guitars. That D string hole was where they would screw a template into the back of the headstock to drill out the tuning keyholes and tuning key screw holes for placement. That hole was not filled since it wouldn’t be seen being hidden under the tuning key.

The plastics for a Stratocaster includes the volume and tone knobs, the pickup selector tip, the pickguard, and the pickup covers. Early in 1957, the guitars featured plastic parts that are made of a substance commonly referred to as Bakelite (Pronounced Bake-a-lite). It was very prone to smoothing out, cracking, or breaking because it was a soft and brittle material. Notice how the volume knob below is cracked and the top rim has rounded from the wear over the years. (The pictures below are Bakelite or Polystyrene parts. They were commonly used by Fender for Strats from 1954 – early 1957. They switched to using ABS plastic in early to mid 1957.) 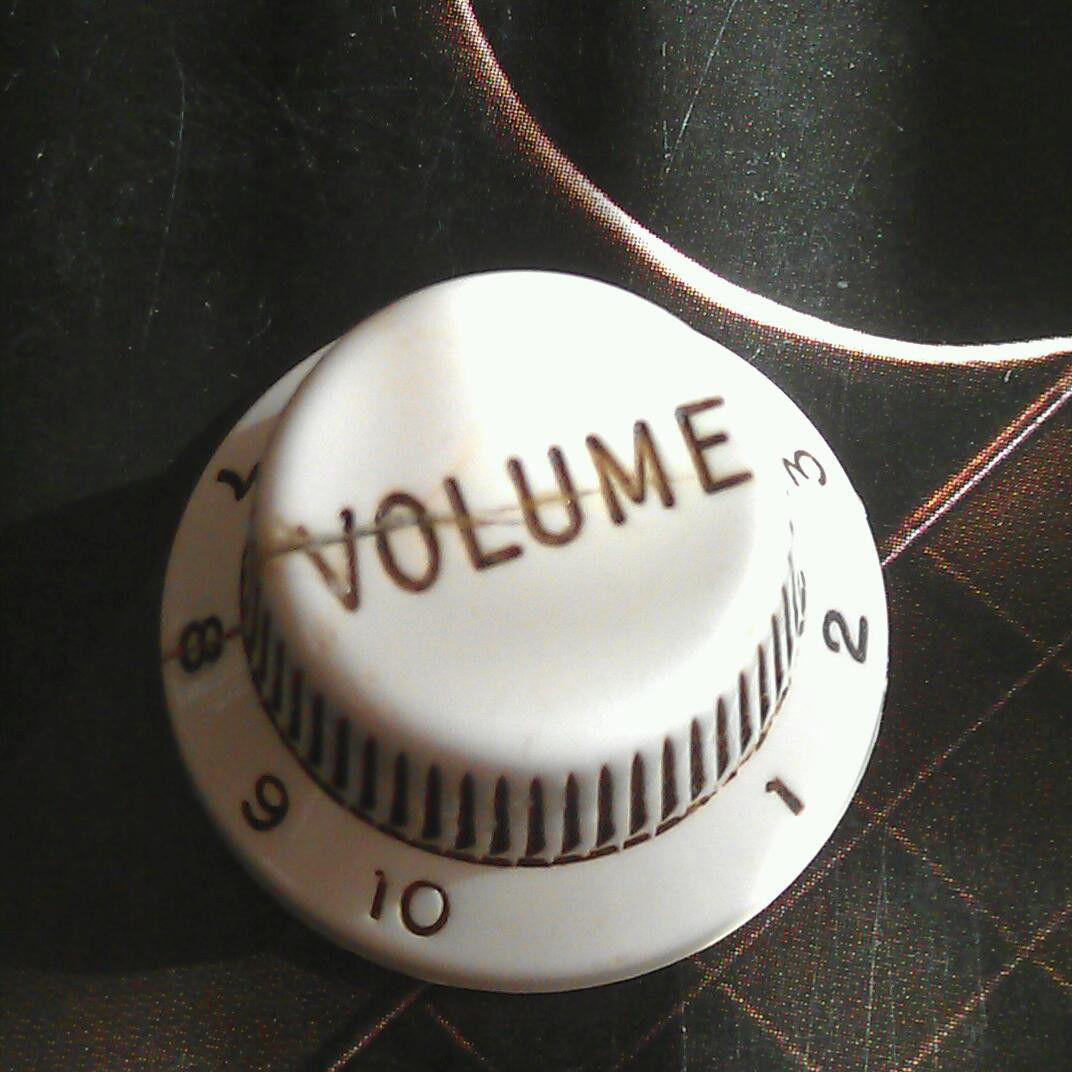 Now compare it to the tone knob below. You’ll notice the one below made from the same material is still sharp from not being used as much. 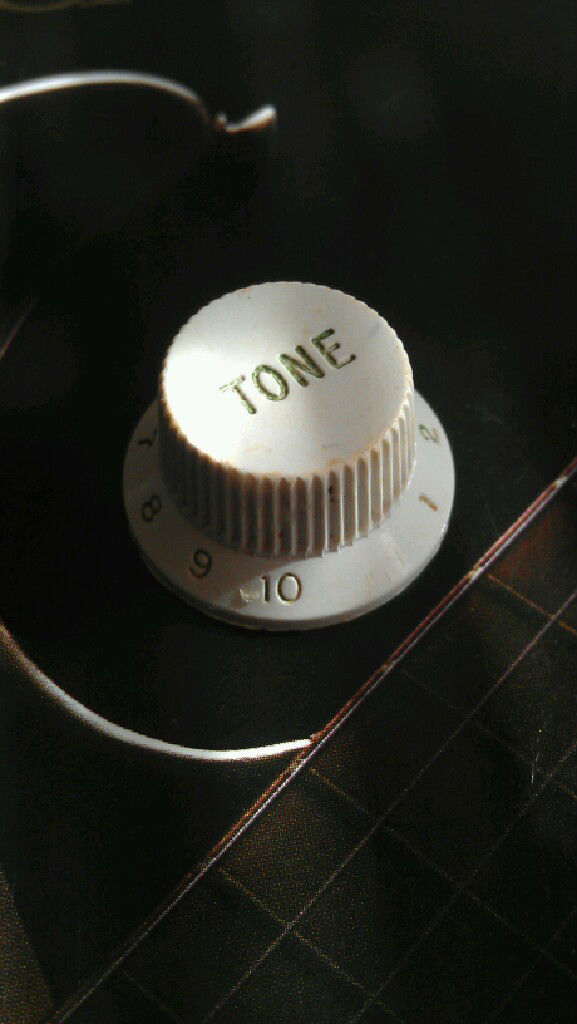 You will also see parts break very easily from that time period. It’s not uncommon to see the pickup cover tops broken halfway across the pickups. Below is a set of broken bakelite pickup covers. 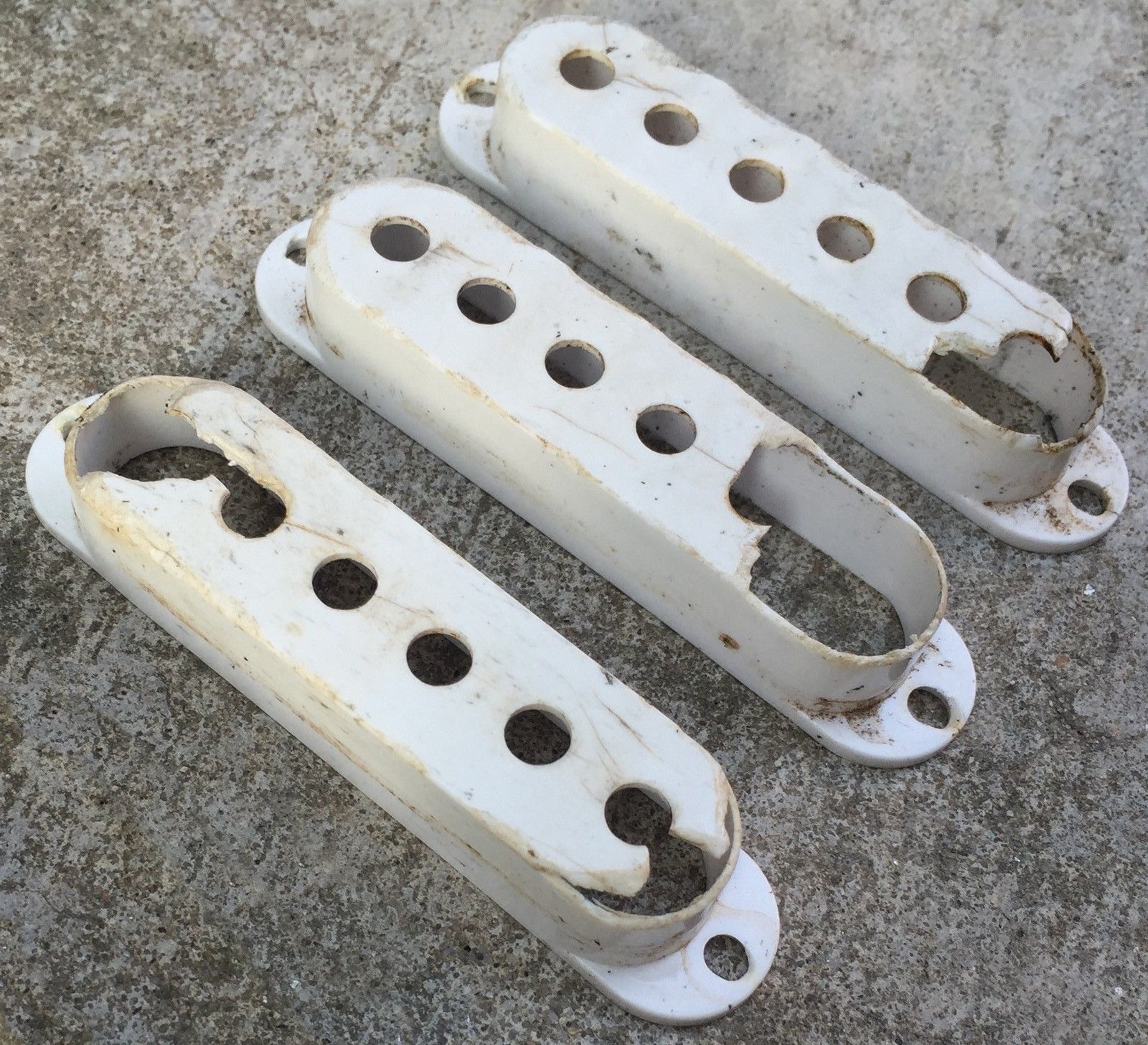 The serial number range for the 57 Fender Strat is generally from 16000 to 25000 (some numbers with a “0” or “-” prefix on the neck plate). If you need to figure out the exact year of your pre-CBS Fender Stratocaster, use the serial number and the general features of the guitar. An interesting side note for 1957 that ran into early 1958 was a run of neck plates that are called “double stamped plates”. They were originally stamped with serial numbers on the wrong side of the neck plates. They were then flipped over and stamped correctly. Here is an image of a late 57/early 58 that I owned with a double stamped plate. 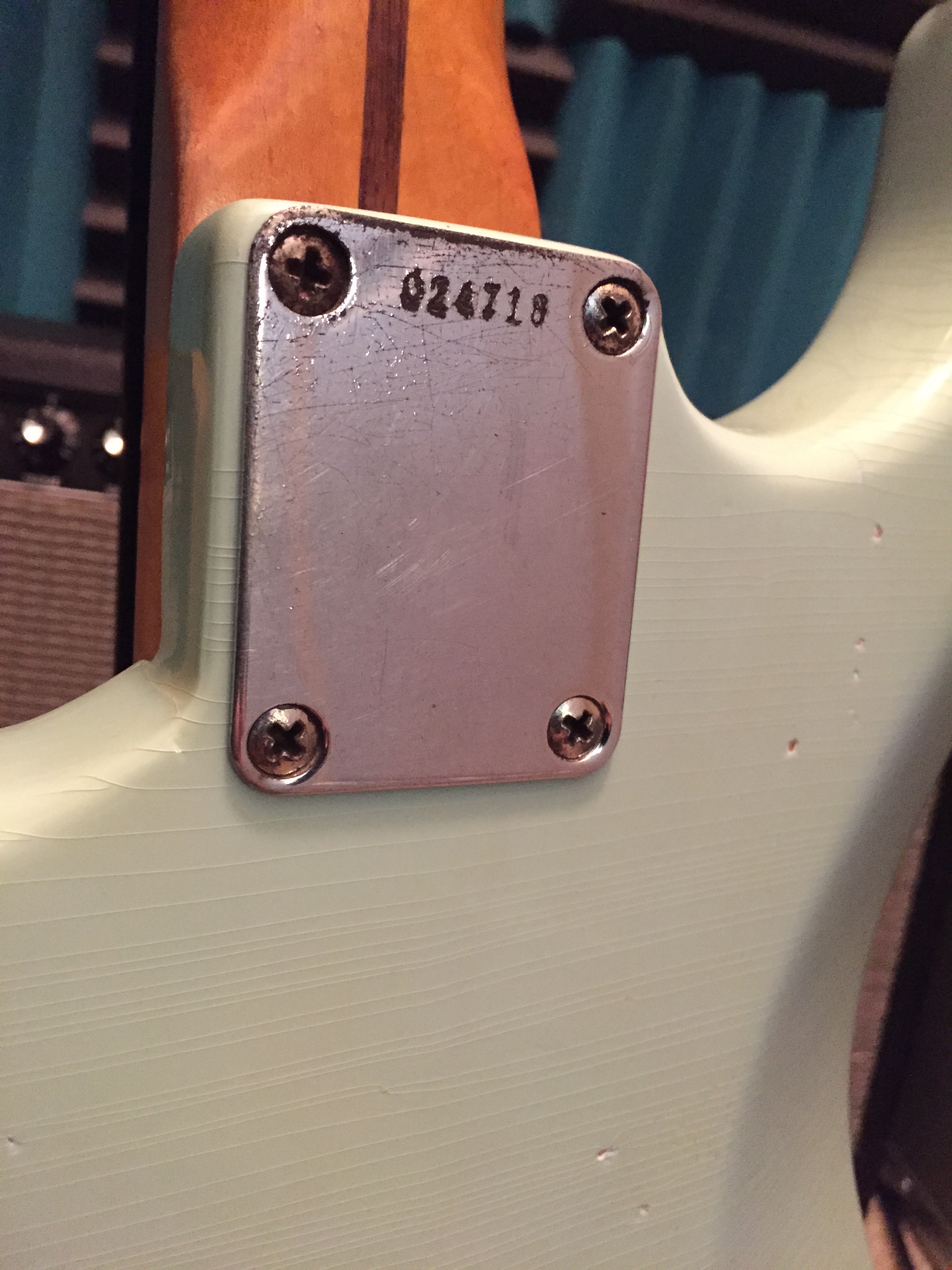 Here is the back of the neck plate:

This guitar was interesting because it had a February 1958 neck date but a V shaped neck. The guitar had full 1957 features and serial number. You can see the actual serial number had a 0 start the number and a – starting the back plate serial number.

The cases from 1957 were a tweed hardshell case with a red interior. They featured a tweed covering that was sprayed with a clear nitro that yellows over time. It has a side pocket, a fender logo near the headstock end of the case (which commonly falls off) and a logo on the upper inside from the manufacturer of the inside material Koylon. See below for a great example complete with brown leather ends and handle: 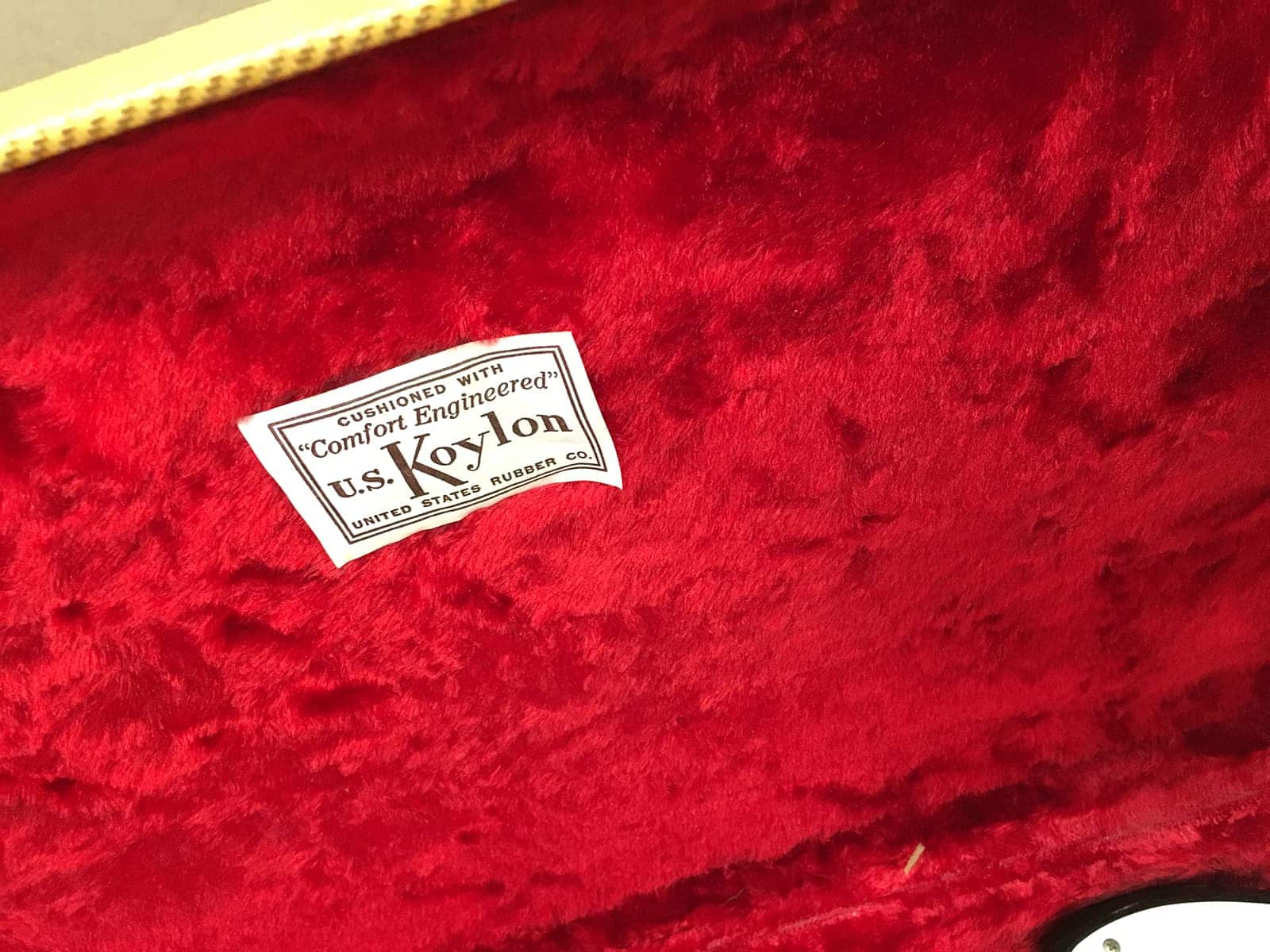 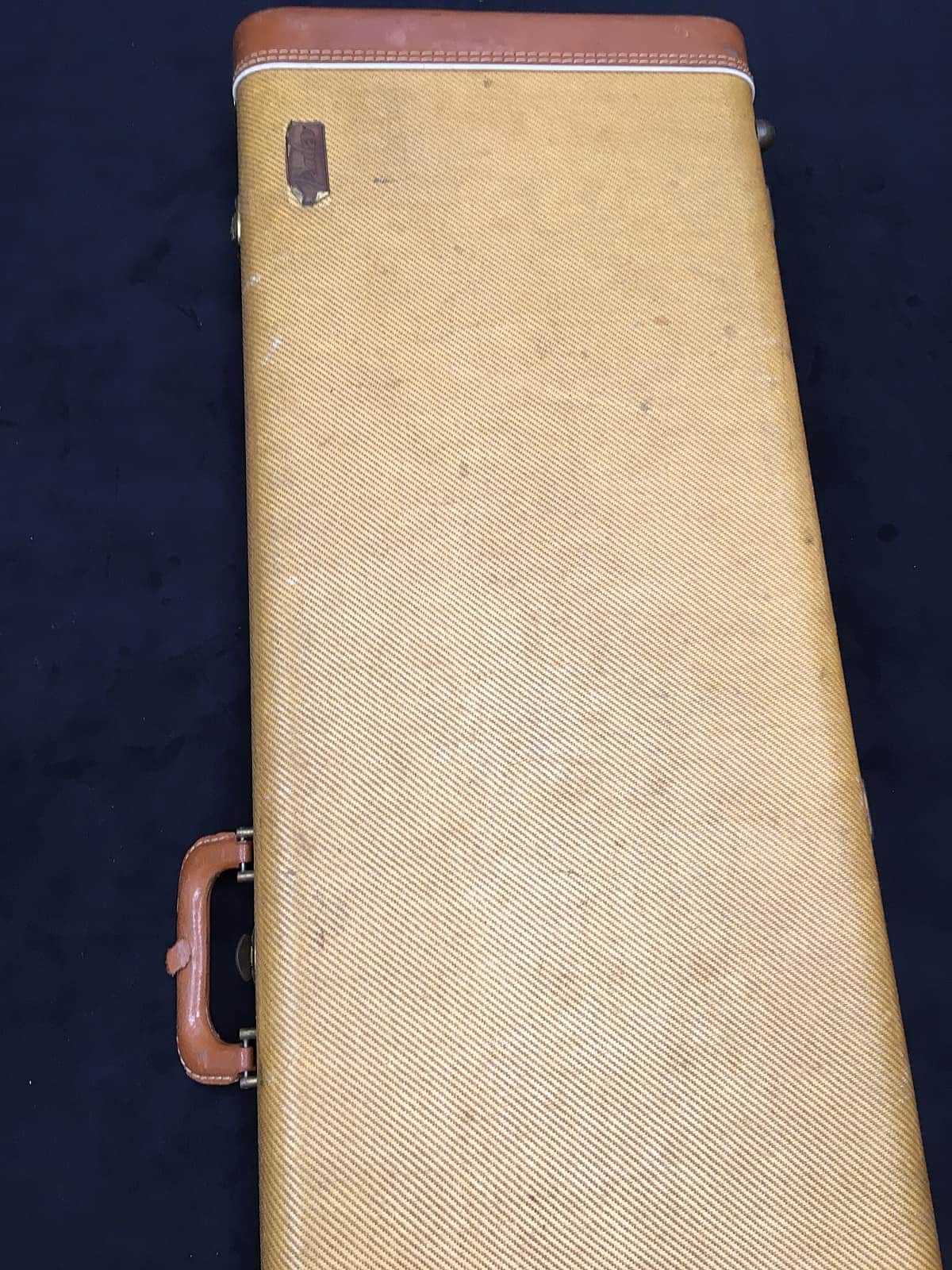 You can see in the picture above that the center latch on the mid-50s cases was located inside the handle. That garnered the nickname knuckle buster. You can only imagine why right? That’s the reason why on later versions the center latch was moved to the side of the handle.